Posted on September 17, 2015 By Virginia Gingras

How do you tell a cow to get out of the way?

Day seven was another big day ending at the 492nd kilometer. She is more than half way there!! First I’ll start with a video that I forgot to add  from yesterday, Day #7….

Here is a video from this morning…

Below is the email I received from Captain Barb Campbell at the end of the day.

What an exciting day! Virginia set off in the dark into Duncan Crevice
Caves Provincial Nature Reserve, accompanied by her all-day pacer, Greg
Yaneff, and Denise Rispolie, her Day 6 captain.

We were met in mid-morning by John, a reporter from the Collingwood
Connection who interviewed Virginia. Denise headed for home where she
has 10-month-old twins and a 3-year-old waiting! (Probably very similar
to being a trail captain on a Bruce Trail Run.) Christina Blackley, who
had paced Virginia earlier in the run, showed up at 10 a.m. to run “20 km”.

At noon, as Virginia caught her first glimpse of beautiful Georgian Bay
from Blue Mountain, Julie and Amanda of Rogers Television joined us for
a fun session including a 10-minute interview, which Virginia totally
rocked! We all had fun, including the reporters.

In mid-afternoon, there was a trail re-route that Virginia wasn’t
looking forward to. Instead of a 2 km trail through the woods, closed
due to a rickety foot bridge, she would have to do long road run around
a block of land, adding 3 km to her Bruce Trail run. Well, that re-route
ended up adding lots of fun to her day! As I was setting up an aid
station at the corner of two roads, a mountain biker, Joe, rode up and
we started chatting. He ended up riding most of the way to the next aid
station with Virginia, Greg and Christina, and they had a great time.

But that wasn’t all. I set up that aid station at the entrance to an ATV
trail blocked by two rocks. Just as I saw the runners approaching, a man
arrived on a front end loader and asked me to move since I was on
private property and he wanted to move the rocks. He was totally right
but I only had 60 seconds until the runners arrived so I quickly
explained my plight and asked if he could be tempted to wait 10 minutes
in exchange for a buttertart. “Is it homemade?” “Ravenna General Store.”
“Same thing!”, he smiled. Kevin, who looked like Jon Bon Jovi, jumped
off to shake Virginia’s hand and hear more about what she was doing.
Before we left, Virginia insisted on a photo with him on the front end
loader, in honour of her Dad.

Just a few kilometers later was the highlight of the day. Ray brought
Virginia’s sons to say hello! She had been a little worried that she
might not want to keep going if she saw them but after lots of hugs and
happy tears, the boys cheered for Mommy to keep running fast. As soon as
they were gone, they asked me if there were any good snacks in her
cooler. 🙂

Greg was a force of pure energy and joy from start to finish of this
15-hour day. He cracked jokes, took photos, sang songs and even danced a
little. Christina had planned to run for a few hours between 10 a.m. and
2 p.m. She, Virginia and Greg were having such a great time that she
ended up sticking around until the bitter end at 9:10 p.m.! The last few
times they arrived at aid stations, I could hear their music and laughs
before I could see them. Their last aid station, as the sun set at 64
km, was honestly their most energetic and excited break of the day.

We made it through some really gnarly sections that had worried Virginia
after her tough 3-day test run. There was always something going on
today that kept the energy high. We’re really proud of what she pulled
off today! 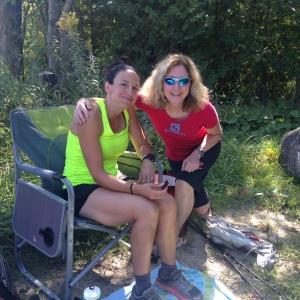 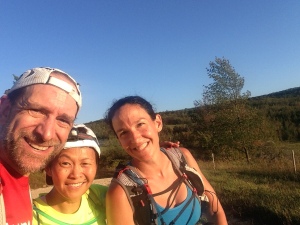 Gin reported that Greg Yaneff was a 54 year old rock star… must be, ‘cuz Gin looks like a drunk’n groupie in this photo

Husband Ray shaking hands with all the hot men Gin comes out of the woods with — the only thing hotter—Ray !

I’ll sign off with the end of the day video and the video when Gin met the boys — which was for sure the highlight of her day.